Easter was always about Lent ending to me. As as child,  Lent was an insufferable length of time that stretched to infinity. I didn’t enjoy going to school. I didn’t eat sweets at school anyway. I just loved some timeout over the weekend with a book and a bar of chocolate.

Suddenly Lent came along and stopped you in your tracks. Sacrifice?  I may as well have given up happiness!

Easter started with Pancake Tuesday. It was fine.It just had that aura of the ‘beginning of the end’ about it as I attempted flipping pancakes.We were ten miles away from adventurous at all times in my house so the pancakes were basic with honey, lemon and sugar. I only add the good stuff now. Nutella. Strawberries. The pancakes seemed to cause arguments. We never had a decent frying pan for them, just the one pan from all year (a pan for all seasons) and inevitably they stuck.

I once called it Pancake Tuesday in front of my Granny. She wasn’t impressed. It was Shrove Tuesday. The Lord didn’t eat pancakes.

We then had Ash Wednesday. I counted the days on the calendar miserably. I also couldn’t eat meat that day. I didn’t like fish then either. Recently, my mother said she knew why I was adverse to fish then but fine with it now. We only cooked strong smelling cod. What a turn off. These days I make prawns. Lemon sole. Salmon. Pasta and pizza were not even given a thought of in our house back in the day. Where would you even get it?! Fancy foreign food, my Dad called it. So I ate Birds Eye potato waffles with peas in the holes and pretended they were windows in a tower block, like in the film ‘Rear Window’. As I said to another blogger recently, it isn’t very sacrificial when Captain Birds Eye is beaming at you!

Oh yes. Don’t forget the blob of ashes on the head. You must have it or people would think you weren’t at mass. When my Gran was very elderly, we would bring it to her.

Lent was all about ‘a giving things up competition’ in my class, like it was parodied in Fr Ted, see Fr Ted and nineties Ireland… A nod to Frank Kelly. Sweets, chocolate and crisis HAD to go. Anything else was scorned.

One year I tried giving up bread. Everyone in school was appalled. That wasn’t sacrifice. This was when the mention of an Atkins diet would have everyone in tears laughing. Ham sandwiches were my go to. Big sacrifice for me! I definitely justified it as I munched on a Kit Kat.

When you did give up sweets, every bit of a treat you were given was put into an old tin and in my case, put under the bed. This was the big reward. Easter Sunday would dawn and I would be in that tin like a cat on cream.

There was one occasion when you could break Lent. St Patrick’s Day. I had no idea how that was allowed but I asked no questions and had a good old feast from the tin that day.

The Sunday before Easter would creep up on you like a spider in the night. You wouldn’t see it coming, then boom. You were at mass in your Sunday best, cramped into a pew with all the latecomers pushing into space that didn’t exist and you suddenly realised. Palm Sunday. Extra long mass. Sweat breaks out on your brow. I always felt nauseated by the end of this one due to crowds and heat. The blessed palm would sit on your fireplace for the remainder of the year reminding you of that mass.

It was kept for luck.

Holy Thursday meant holidays and time off. It also marked the start of a lot of masses. The Sunday dress would be earning its money that week.

Good Friday was tough but it was so near the goal. We secretly called it Fishy Friday. It had the air of waiting about it as a heavy silence slumped over the streets. Nothing opened. No shops. No pubs. No alcohol on this day. It didn’t matter to me but now I see pubs fighting to resist this. I think they are desperately greedy to even try. Give the beer a break!  More waffles and peas for me. Why didn’t I ever think of a grilled cheese?!

Light began to dawn Easter Saturday. We often ate chicken that day. That day was good. No mass either.

Easter Sunday would be a trip to my other Granny. I loved going to her home. My uncle lived there too, next door with his family . His family kept sheep.

Can you guess the next part?

Yes, I would have spent the last visits playing with lambs. Once I named one Taz after the cartoon Tasmanian devil. We turned up. He was gone from his field. Like the others before, I was told his mother had knocked him into a ditch and he drowned.

Was that better than the truth?

I eventually copped that the sacrificial lamb on our table was indeed my old friend. 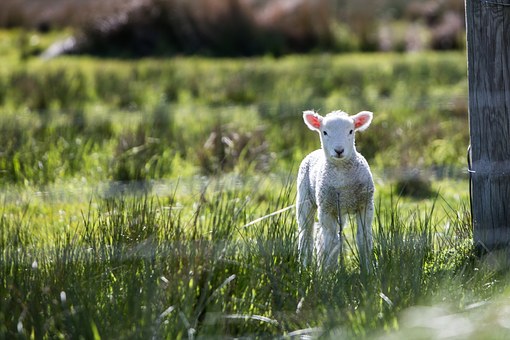 I had refused lamb before due to what it was. There was no way I would succomb now. I had no such reservations with pigs. Chickens. Cows. My mother even told me that it was beef once. Another lie! To trick me. I made a speech about lies, ten commandments etc. She stuck to the fib. Lamb was a luxury. I wasn’t going to be allowed cock my nose up to it.

I objected strongly to the mint sauce also. It had a very strong, unpleasant smell. To this day if I enter a restaurant and there is mint sauce on the menu, I can smell it from the door and am repulsed. I was a pain in the ass really.

So the chocolate egg was the best bit. Scratchy Sunday dress, another mass, lies about dinner, forced to eat a pet, being nauseated by mint sauce; it all ended. The egg came then. Cadbury’s. Chocolatey deliciousness! What has it to do with Easter ? My more severe Granny questioned it. I didn’t care. This was a good way to celebrate!

The Easter Bunny never came near us until the Celtic Tiger and media introduced him. We welcome you bunny with open arms!

What a great guy!

So now Easter has a whole new element of fun for children. Egg hunts and preparations. Arts and crafts of all kinds. Mine was religious and lamby but also full of sweet pleasures. I hope I don’t seem blasphemous. We all felt the same as children. Easter was interesting. Difficult. Definitely a marker for Spring. A paradoxical celebration. As it should be perhaps.

I look forward to being a Mum at Easter. The girls don’t get it yet. Gigi made some crafts but next year she will know why we made them!

22 thoughts on “Easter of my Youth”